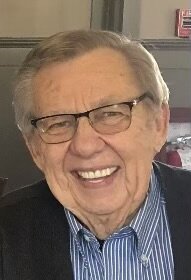 Please share a memory of Charles to include in a keepsake book for family and friends.
View Tribute Book

Colonie - Charles Blackman “Buddy”, 80 years old, passed away peacefully surrounded by loving family on Monday, May 9, 2022. Buddy was the son of late Edson and Mary Blackman-Willey from Albany, NY. He was raised in Colonie, NY and attended South Colonie High School. Buddy worked for and retired from NYS OGS. Buddy was most well-known for his love of his lake camp and spending time with family and friends in the Adirondacks on Schroon Lake, NY in which he really enjoyed taking his boat out on the lake and fishing. One of his biggest hobbies was assembling and playing with his model train city which he had worked on for decades. Buddy also enjoyed meeting with his friends for coffee every morning at McDonald’s and attending car shows all throughout the area. He loved spending winters with his wife and friends in Florida.

Buddy is predeceased by his brothers Ed Blackman, Arnie and Marty Willey. Buddy is survived by his beloved wife Micki (DiLillo) Blackman; sister, Patricia Macejka; brother, Richard Willey Sr. (Brenda); sister-in-laws, Marie DiLillo, Gloria Kelly, Deborah Wertman (Richard); brother-in-law, Adam Calka (Laurie).  He was especially close to his nephews, Rich Willey (Tracey) and Rob Willey (Michele) who were like sons to him, and David Pollock (RooRoo). He also held a special place in his heart for his niece Amy Stanley (Scott).  Buddy is also survived by additional nieces and nephews.

To send flowers to the family or plant a tree in memory of Charles Blackman, please visit Tribute Store
Print
Friday
13
May