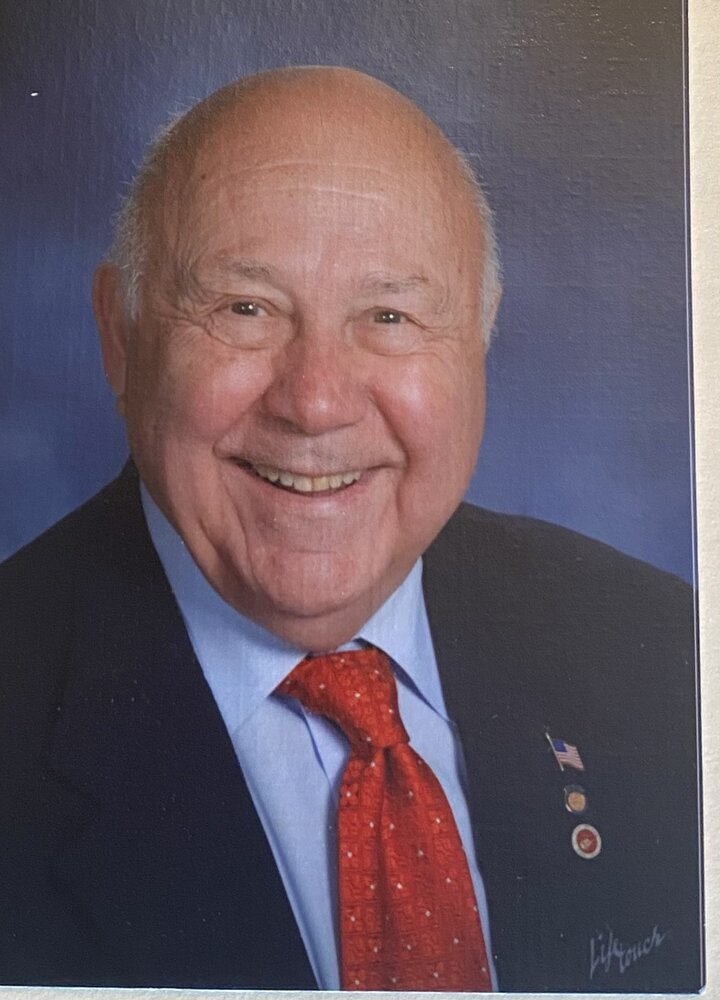 Born on March 23,1936 in Pittsfield, Ma. He was the son of the late Doris and James Prentiss.

He graduated from Pittsfield High School early at the young age of 17 and enlisted in the United States Marines Corps serving his country for three years during the Korean War.

Thanks to the G.I. Bill, Bob was able to attend college.  He graduated from the University of Massachusetts with a B.A. in Government, finishing the 4-year course requirements in only 2 ½ years. He then earned his Masters degree in Journalism from the State University of Iowa where he held a Teaching Assistantship. He was certified to teach English and Social Studies at the secondary school level in both New York and Massachusetts.

He started his career as a newspaper reporter for the Berkshire Eagle and then news editor for the Springfield Union in Massachusetts. He taught journalism at Ohio State University, and served as a Public Relations Officer for MacMurray College in Illinois, the Massachusetts Department of Public Works, and the State University of New York, as well as for Assembly Speaker Perry Duryea, the last Republican to hold that job. He was also Director of Public Relations for St. Peter's Hospital.

For more than 25 years he owned and operated three franchises under Prentiss Personnel Services that he founded with his late wife Marlene.

Bob proudly served in elective public office for more than 33 years. He was a city councilman-at-large in his hometown of Pittsfield later moving to Colonie where he served 19 years as an Albany County Legislator. He was elected to the NYS Assembly in 1994 where he served 10 years. Bob had a reputation for being a tenacious campaigner. He would head out on the campaign trail with his children and the neighborhood kids handing out fliers. He was extremely passionate about serving his community, he loved going door to door getting to know his constituents and making their needs a priority. He always said “People Come First!”

He was a member of several local organizations including Colonie VFW Post 8692, the Capt. William Dale O’Brien Detachment of the Marine Corps League, American Legion 1450 in Halfmoon, Colonie BPOE Lodge 2192, Korean War Veterans Association, Fuller Road Volunteer Fire Department, Colonie and New Scotland Kiwanis Clubs and the New Scotland Historical Society. He was a parishioner at St. Matthew’s Church in Voorheesville where he was active in the church choir.

During the summer months, Bob would spend time with family at his camp on Harrisburg Lake where he could be heard singing “Some Enchanted Evening” on his way down to the beach to watch the sunset with a martini in his hand and his black lab, Shadow by his side.

After retiring, Bob and Marlene started a new venture, Prentiss Antiques, buying and selling treasures at different shows around the Northeast.

Bob was always on the go. He and Marlene loved to travel with their children, Lisa and Roger when they were young, visiting almost every state in the U.S.

Bob and Marlene were married in 1968 and shared 42 wonderful years together before she passed away in 2010.

He was so fortunate and blessed to have met Anna Cavanaugh Newbould in 2011 at a ballroom dancing event and they married in 2013.

They vacationed often, visiting family and friends all over. They went to Ireland to kiss the Blarney Stone and he was able to travel one last time to see Pearl Harbor in February 2020 just before Covid happened.

Family meant everything to Bob, it brought him great joy watching his grandchildren grow up and would always attend their ball games, dance recitals, plays and performances.

Bob was a vigorous and energetic person who approached everyday enthusiastically. He truly lived life to its fullest.  He touched the lives of a lot of people for the better.

The family is so thankful for the care Bob received through Community Hospice and extremely grateful for Ed Chesebro, his full-time in home nurse who went above and beyond giving him the best care possible.

Contributions in memory of Bob can be made to: The Community Hospice Foundation, 310 S. Manning Blvd., Albany, NY 12208 or The Alzheimer’s Association, Northeastern Chapter www.alz.org/northeasternny

To send flowers to the family or plant a tree in memory of Robert Prentiss, please visit Tribute Store
Wednesday
23
March

Share Your Memory of
Robert
Upload Your Memory View All Memories
Be the first to upload a memory!
Share A Memory
Send Flowers
Plant a Tree