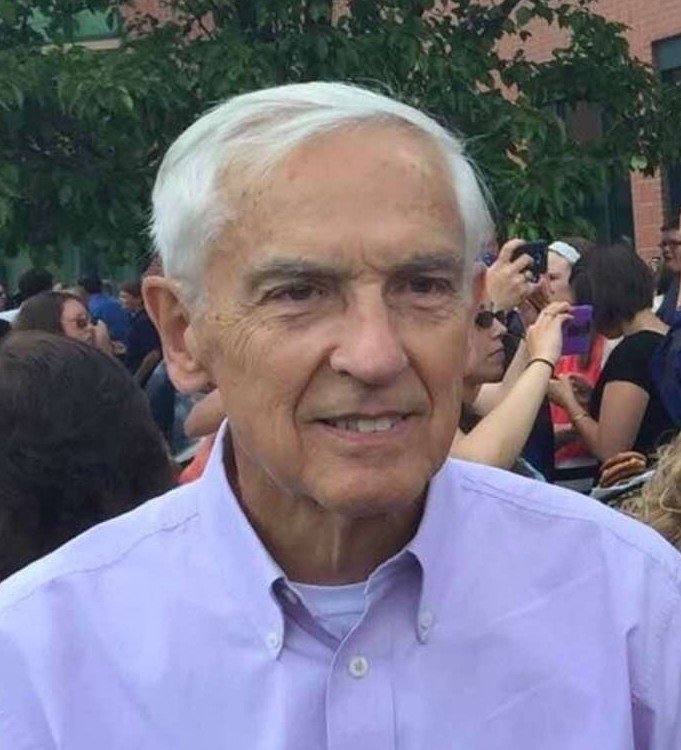 Please share a memory of Ronald to include in a keepsake book for family and friends.
View Tribute Book
Ronald Charles Pearce, 84, of Voorheesville, died December 9, 2019, with his family, due to Alzheimer’s disease. Ron was born on March 6, 1935 to Richard and Marjorie (Embody) Pearce and grew up on the family dairy farm, Pearceholm Farms, in Auburn, NY, alongside his four brothers and one sister. He attended Union Springs Central School where he met the love of his life, Bobbi Nickerson, in 9th grade. Ron went to Cornell University; he joined AGR fraternity, married Bobbi, welcomed their first child and graduated in 1957 with a BS in Agricultural Economics. His first job was teaching Ag and Driver’s Ed in McGraw, NY. Ron returned to Cornell to earn his Masters. He worked the rest of his career as a Milk Marketing Administrator for the USDA and New York State in Philadelphia, Albany and New York City. Ron volunteered in many capacities. He coached Little League in Broomall, PA and after the family relocated to Voorheesville, he and Leo Burgoon organized the Voorheesville Babe Ruth Baseball League. He was one of the founders of VASCO. He was a faithful member of the First United Methodist Church of Voorheesville where he worked tirelessly each fall at the Auction Bazaar and held various positions on the Board of Trustees. Ron sat on the Cooperative Extension’s Rural Housing Board and volunteered for Community Caregivers as a board member and driver. Ron was very athletic and enjoyed playing and watching sports, especially baseball and basketball. He was a lifelong Yankees fan. He and Bobbi traveled extensively during retirement but never stayed away from family for too long. He rarely missed a grandchild’s sporting event or concert. Ron kept an immaculate lawn and an abundant garden. He was a gifted artist, creating treasured sketches, paintings and toys for his family. Ron’s real passion was his family. He and Bobbi spent 64 years together, raising four children along the way. His quiet, gentle nature drew kids to him. He was a loving, playful husband and a tender, patient, funny dad and grandpa. He had a dry sense of humor and loved to laugh, especially when telling stories from boyhood and high school. His grandchildren loved being with him. Ron is predeceased by his daughter, Lynn Doris, his parents and brothers, Carl, Jack and Jim. He is survived by his loving wife, Bobbi, brother Bill (Sandra) Pearce, sister Jean (Jake) Schmitz, sister-in-law MaryAnn Pearce, son Richard (Sandy) Pearce, daughters Colleen (Greg) Badger and Lauren (John) Furlong, nine grandchildren, four great grandchildren and many nieces and nephews. A celebration of Ron’s life will be held on Saturday, January 4, 2020, at 1:00 pm at the First United Methodist Church, 68 Maple Ave., Voorheesville. Friends and family are welcome to join us for a reception after the service in the church Social Hall. In lieu of flowers, contributions in Ron’s name can be made to the Juvenile Diabetes Research Foundation at www.jdrf.org.
To send flowers to the family or plant a tree in memory of Ronald Pearce, please visit Tribute Store
Print
Saturday
4
January