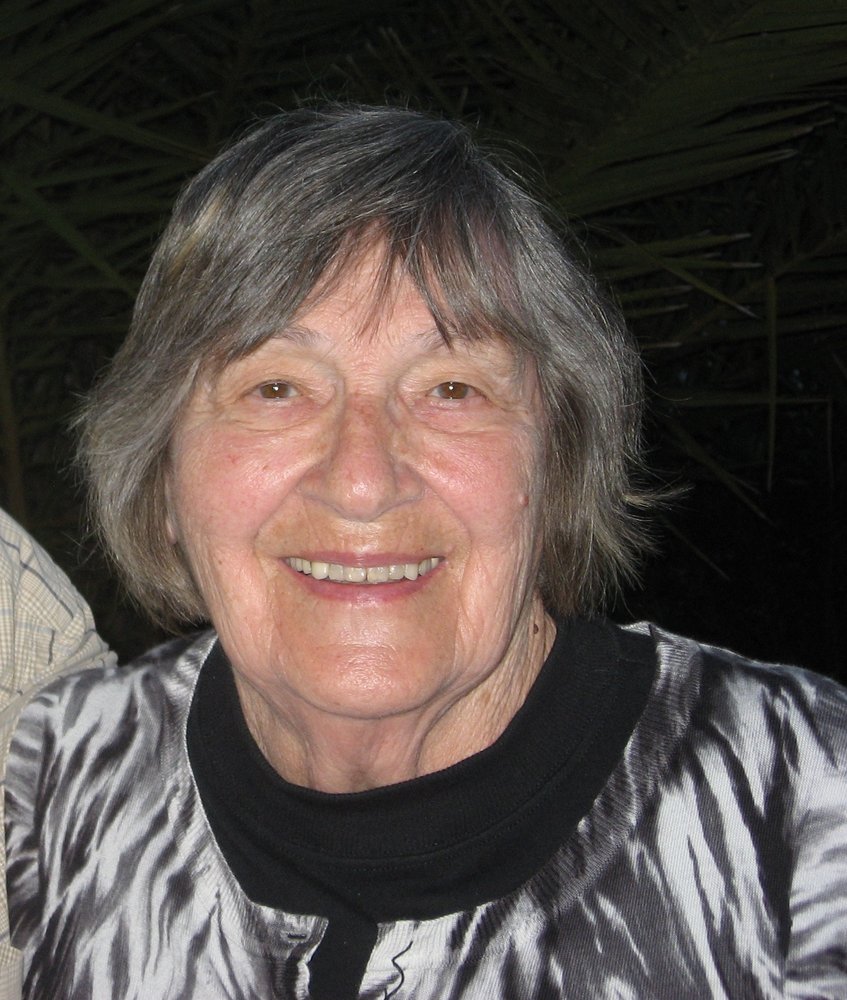 Please share a memory of Frances to include in a keepsake book for family and friends.
View Tribute Book

Frances, the middle child of nine, was born on March 12, 1929 in Becher, Ontario, Canada to Rachel (Muirhead) and Carman Horley.  She was raised in Sarnia, Ontario and married her high school sweetheart, Jack Godley, in 1947. They were married for almost 70 years and had two daughters, Linda and Kathryn.

When asked where she was from, Fran usually responded, “all over”. She and Jack spent their early married years in the house that Jack built in Sarnia. In 1963, they immigrated to Trenton MI for a good job opportunity for Jack.  They retired to Nokomis, FL, an area they loved because of its beauty and a close-knit community of dear friends. In their early 80s, they uprooted yet again, to Quincy IL, to be near and help their daughter Linda who was ill.  After Fran suffered a major stroke, they returned to the Sarasota area briefly, and then, heartbroken after Linda’s death, they moved again to upstate NY, to be near Kathryn and her family.  Over the past 16 months, Fran found herself and had “a life” again, thanks to the wonderful staff and activities at Eddy Hawthorne Ridge Memory Care, where she felt at home, despite continued talk of returning to Florida!

Frances was a hard worker. In her teen years, during WWII, she worked at the A&P grocery store, and was proud to bring rationed foods home to her mother.  She was a frugal homemaker, growing vegetables, canning and cooking. She sewed and knit much of the family’s clothing and, in later years, made spectacular Halloween costumes for her granddaughters. Once her daughters were in high school, she worked as a bank teller, rising to branch manager, the position she held upon her retirement. As bank manager, she took special pride in going “above and beyond” in helping elderly clients with their finances. Throughout her life, Fran was an involved church member.  At the Ford Yacht Club, Grosse Isle, MI, she and Jack forged lifelong friendships while they enjoyed sailing.  She was very social, loved to entertain and have fun, and enjoyed dinner parties with friends.   She knew her mind and could “hold her own”, which she attributed to growing up with five brothers.

Survivors include her daughter Kathryn and son-in-law George Smith of Altamont NY; two granddaughters, Allegra Smith of Middletown NY and Celeste Smith of Naples NY; her sister Ruth Sainsbury (John) of Bermuda, brother Joseph of Sarnia, Ontario, and many nieces and nephews.  Frances was predeceased by her devoted husband Jack in 2016 and daughter Linda in 2015.   She was also predeceased by her parents, four brothers (Alistair, Wallace, Floyd, and William), and two sisters (Evelyn and Jane).

Cremation has occurred. Interment will be private, at the Venice Presbyterian Church, Venice, FL, next to Jack.  The family thanks Community Hospice for their gentle loving care of Frances in her final days.  Also, we will never forget the staff of Eddy Hawthorne Ridge, who knew and loved her, even in her “moments”. In recognition of that kindness and love, we ask that those wishing to make a donation in Frances’ memory, do so to the Northeast Health Foundation (designate Hawthorne Ridge), 310 South Manning Blvd, Albany NY 12208. Or online at: https://donate.givetonortheast.org/  (designate Hawthorne Ridge).

To plant a beautiful memorial tree in memory of Frances Godley, please visit our Tree Store

A Memorial Tree was planted for Frances
We are deeply sorry for your loss ~ the staff at Reilly & Son Funeral Home Inc
Join in honoring their life - plant a memorial tree
Services for Frances Godley
There are no events scheduled. You can still show your support by planting a tree in memory of Frances Godley.
Plant a tree in memory of Frances
Print
Online Memory & Photo Sharing Event
Online Event
About this Event

Look inside to read what others have shared
Family and friends are coming together online to create a special keepsake. Every memory left on the online obituary will be automatically included in this book.
View Tribute Book
Share A Memory
Plant a Tree