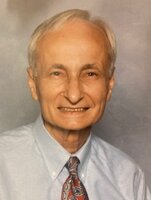 Raleigh, North Carolina - Clark B. Vilar, 86, died on Sunday, September 26, 2021 at the Pruitt Nursing Home in Raleigh. Born in Amsterdam on November 12, 1934, he was the son of the late Andrew Anthony and Ruth Leona Billington Vilar. Clark attended Union College, Marquette University and Niagara University from which he attained a Master’s Degree in English Literature. He taught English Literature on Long Island and in Virginia. He opened an art shop in Virginia for awhile and then he became a Real Estate agent. In his younger years he enjoyed playing tennis and more recently was an active golfer. Clark is survived by his devoted brother, Ricardo “Rick” Vilar (Carol Haley) of Voorheesville; nieces, Carol Conley (Jim) and Joanne Vinciguerra (Steve); great nephews, Jimmy and Ryan Conley, Jayden Vinciguerra and Christopher Laniewski. He is also survived by several cousins in Amsterdam. Private viewing will be held at the Reilly & Son Funeral Home, Voorheesville at the convenience of the family followed by burial at Holy Cross Cemetery in Rotterdam. For those who wish, memorial donations to the Parkinson’s Foundation, 1359 Broadway, Suite 1509, New York, NY 10018 would be appreciated.