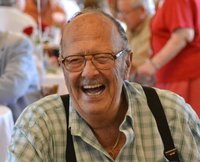 Voorheesville – Gerald C. Condon, 84, died Sunday, August 30, 2020 at his home. Born in Middlebury, VT, Gerald had resided in Voorheesville for the past 55 years. He worked in the glass industry his whole life, founding Dave’s Glass Company in 1976. He owned and operated that for 20 years and continued in the family business for an additional 20 years. From 2004 until 2014 he also worked as a bus driver. Gerald was a longtime member of the Voorheesville Area Ambulance and an 18 year volunteer for the Red Cross where he taught safety classes and received an award in 1994 for his dedicated service. An avid outdoorsman and hunter, he was a member of the Voorheesville Rod and Gun Club and the Elsmere Rod and Gun Club. Gerald was the husband of the late Theresa Corvin Condon; father of Deborah Danz (Brian) of Ravena, David Condon (Patty) of Ft. Myers, FL, Denise Nuggent (John) of California, MD, Darlene Gallagher (Tom) of Albany and the late Douglas Condon; grandfather of Carlie, Jason, Craig, Nichole, Michael, Christopher, Adam and Joseph; great-grandfather of Liam, Josiah, Carson, Jayden, Maddie, Ellie, Aniyah, Ben and the late Kaliyah; brother of Joyce Zawistowski of Middlebury, VT and Lawrence Condon of Schenectady; and loving companion of Janet Klopp. He was predeceased his parents and other siblings. A funeral mass will be celebrated at 10:00 a.m. Friday, September 4, 2020 at St. Matthews Church, 25 Mountainview St., Voorheesville. Burial will be in Memory Gardens Cemetery in Colonie. Calling hours will be Thursday from 4 – 7 p.m. in the Reilly & Son Funeral Home, Voorheesville. For those who wish, contributions to the New Scotland Food Pantry, 25 Mountainview St., Voorheesville, NY 12186.