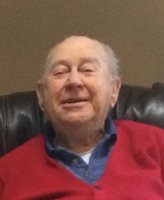 Clarksville - Gerald F. Shoddy, 85, died Wednesday, April 17, 2019 at the Albany Medical Center Hospital.  Born in Clarksville, he was the son of the late Iola Houghtaling and Henry Shoddy, Sr.  He was a veteran of the United States Army, serving during the Korean War.  Most of Gerald’s career was spent with the former Western Electric Co. in Albany and he also worked for Qualteck and Butler Communications.  Family was important to Gerald and he was always happy to be the one responsible for getting the family together.  He enjoyed camping and was a member of the Bethlehem Sportsmans Club, the Onesquethaw Fish & Game Club, the Helderberg Ridgerunners Snowmobile Club and the New Scotland Seniors.

Services will be held at 12:00 noon on Monday, April 22, 2019 at the Reilly & Son Funeral Home, Voorheesville.  Calling hours will be Monday from 10:00 a.m. to 12:00 noon, prior to the service.  Burial will be in Prospect Hill Cemetery in Guilderland.  For those who wish, memorial donations to the Onesquethaw Fire Department, PO Box E, Clarksville, NY 12041-0029  would be appreciated.